I have been cooking, baking, creating, and serving food for as long as I can remember.  I love it.  Food is a universal language.  No matter where you go, it is one of the things that binds us all together.  Like many of you, I have ‘foodie friends’, ‘music friends’, and maybe even ‘wine friends’.

One of my ‘foodie friends’ came up to me a few months ago with her big brown eyes and a serious request.  Her and her husband were looking to change employment, and, because they both worked at hotels, that meant they couldn’t eat their main meal of the day for free anymore.  Nor would they have the same income to eat out whenever they pleased.  She looked at me and asked if there was any way I could help her learn to up her cooking skills so her and her husband could enjoy good food at home and save some money at the same time.  Along with that, I would like to thank one of the local bottled spaghetti sauce companies for bringing her to me with this request (which shall remain nameless) as she said “my sweet husband made me pasta with (nameless) sauce and I said honey, I love you, but I can’t eat this”.

I just couldn’t say no.  I’m always up for people trying to up their cooking game and sending me pictures of their food with the little hearts-in-the-eyes emoticon.

So I said sure and we set to a loose schedule that worked for both of us.  We started off with chicken schnitzel, the classic Balsamic Penne Pasta, Tikka Masala, to name a few.  She was not as incompetent as she had led me to believe, and so before you know it, when I asked what she wanted to try next, she said Chicken Pot Pie.

I was impressed.  I warned her, pastry is a whole beast on it’s own.  “I’m ready”, she replied. I admired her guts.

Her and her husband arrived a little earlier that day.  First we made the filling and let it cool.  Then we did the pastry.  I had been frightened of pastry for YEARS so wasn’t sure how this was going to go.  But she is a very diligent student and did better than just fine.  I made the first one and she did the second and let me tell you, you couldn’t tell the difference.  Dang, the girl has natural talent.

We pieced our pies together and enjoyed wine while they baked in the oven.  Then I actually made everyone wait while they rested a bit.  They were a bit gooey inside but man, the seasoning was perfect and that crust!  Better than any crust I’ve used before.  The six of us inhaled almost two entire pies that night.  It was comfort food at it’s best. 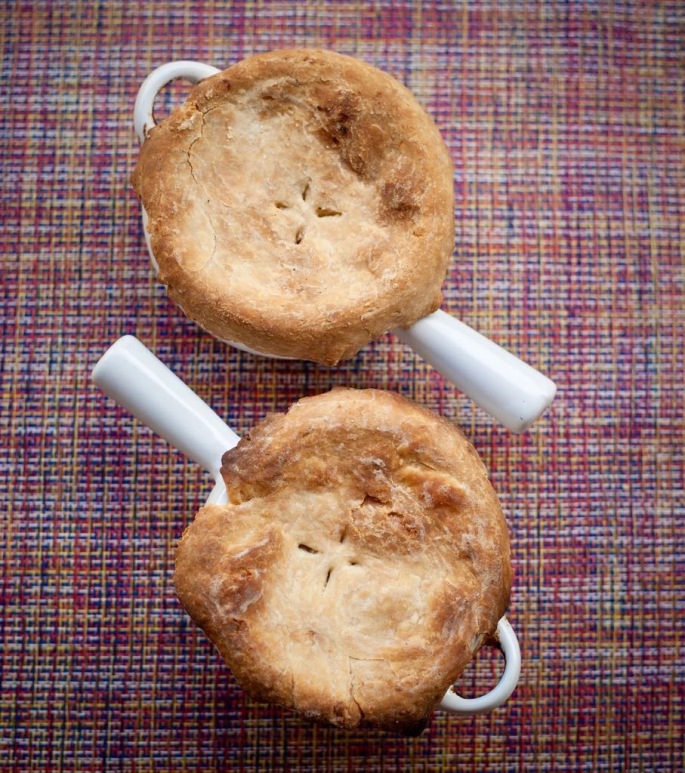 I had to make them again and share the recipe with you.  If I can say anything, use a LOT of seasoning.  I don’t mean salt, I mean sage and thyme.  The second time I made it the seasoning wasn’t as strong and I preferred the first attempt.  You can taste test the mixture before you throw it into the pie crust and adjust it as necessary.  Season season season!

And avoid all people with big brown eyes. Don’t do what I did, I married one.

Season chicken breasts.  In a medium saucepan, fry in a little oil until cooked through, a few minutes per side (or roast in an oven for 30 minutes).  Let cool and then dice or shred chicken.

In sauce-pan, melt butter and add vegetables.  Cook for about 5 minutes or until tender.  Add garlic and stir for another minute.  Add flour and stir about 2 minutes until flour is dissolved.  Add chicken broth and stir until thick.  If mixture has too much liquid, add more flour in. Add whipping cream and chicken.  Check seasoning and let cool.

Remove pastry from refrigerator and divide in half.  Roll out on well floured surface and turn into a pie pan.  Spoon filling into crust.  Roll out second dough and lay on top.  If you have too much excess dough, cut around the edges.  Bring the two crusts together and pinch together.  Alternatively, if you have small baking vessels, do not put a crust on the bottom, just spoon in filling and top with

Bake in a preheated 400 degree oven.  Cook for about 30 minutes, or until crust is golden brown.  Cool ten minutes before serving.

One thought on “Chicken Pot Pie”

A Canadian mom living on the white sands of Riviera Maya, Mexico with a passion for culinary adventures in daily life.

CAN’T FIND WHAT YOU’RE LOOKING FOR?

Last week was March break and I had a class of adorable kiddos who learned how to make Bang Bang Chicken 😊 they dipped and fried and voila! A yummy dinner for the family!
Time keeps getting away from me! Here are some pictures from the last couple PAD THAI classes! Every weekend more students are learning how to make the most authentic Pad Thai out of Thailand right in your own kitchen! Who’s next????
My new motto? Snow=soup. I see lots of snow these days. So this week I made an old classic, roasted tomato soup with grilled cheese croutons. It’s dairy free, just full of broth and veggies and goodness. Go and grab the recipe on the blog!
One of my fav groups got together last Friday for the Pad Thai class. With students across Canada and down to Belize, we learned to adjust ingredients and have one of Thailand’s most famous dishes right in our own kitchens!!
Another class yesterday for Pad Thai and fresh spring rolls took place 😀😀 We were a small class which made for lots of time to talk about substitutions and how to make this recipe just the way your family would like it.
Yesterday was pastry day! With some tricks of the trade we made some apple and mixed berry pies. And everyone’s turned out perfectly flaky, just the way they should.
This recipe is luxurious for a special dinner, and yet easy enough for a weeknight meal. In 30 minutes you can have this creamy deluxe Brie Spinach Porto Farrotto. Yes. That’s farro cooked like risotto. Haven’t used farro? Try it. It’s my favorite of the grains, delicious nutty flavour and filled with proteins, fibre, and nutrients. With more nutrients like spinach and mushrooms you can indulge in some creamy Brie for a gorgeous meal. Check my stories today for a play by play on how to make it.
**NEW YEAR - NEW CLASS**
You know you live in Canada in December when you’ve officially had more soup in one month than you have in ten years of living in Mexico. When it’s cold out there, nothing is more comforting and warming then a hearty bowl of soup. This tortellini, kielbasa, and bean soup is a classic recipe in our family. My 86 year old mom whipped it up today and it never disappoints. It comes together quickly and is soup-er delish. Should I blog it and share the recipe?
Loading Comments...
%d bloggers like this: